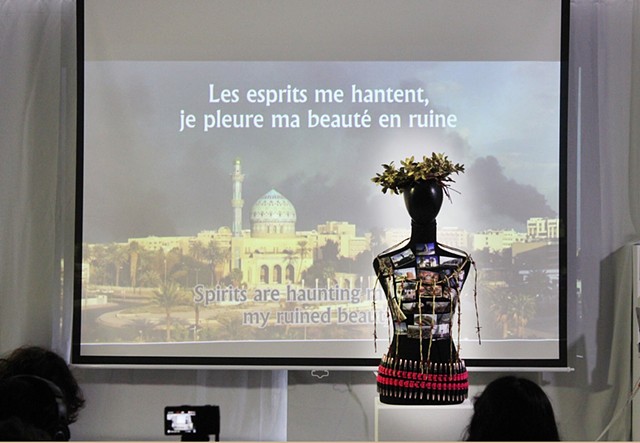 28 Exhibits is an extension of Clear-Hold-Build, an exhibit currently on view in Philadelphia's Twelve Gates Arts, which brings together artists to survey the impact of counterinsurgency over the past seven decades. Clear-Hold-Build is curated by Shimrit Lee, Joshua Nierodzinski and Nataša Prljevi&#263; of HEKLER, an artist-run collaborative platform that fosters critical examination of hospitality and conflict. The event 28 Exhibits is the product of a collaboration between HEKLER and exhibiting artists Dena Al-Adeeb and Farideh Sakhaeifer.

Special thanks to Jelena Prljevi&#263;, Sadra Shabab, and Maryam Ghoreishi for their support and work on A People’s Tribunal: 28 Exhibits.

Mohamed Okab was born in the city of Ur in Iraq, known today as Dhi Qar, in 1953. He grew up in Baghdad, where he finished high school and worked as a bookseller in the cultural and literary heart of the city. He also began painting, a skill which he still uses to transmit his views into visual artwork. In 2013, he was admitted to the U.S. as a refugee, and became a citizen in 2019.