In Tehran a Loud, 2011- I photo transferred the constructed map on plywood and cut the streets that 2009 protests happened. In the map piece, we are not looking at the city but at the depiction of the city. My subject is a constructed map of my hometown, Tehran. Hundreds of screen shots were taken from Google earth and were attached together in Photoshop. Using Google’s satellite imagery became the photographic medium for me, instead of taking photographs. The chosen parts of the city along with the cuts focus the attention to sites that embody partially remembered histories and memories. People in these streets experienced crucial events in 2009 and after. Many people, inside and outside of the country, were curious to know what was happening in those streets and the very little information that they got, were leaked from amateur documents and images that were taken by protesters in those streets. These recorded moments were the only evidence of the denied events. People create symbolic meaning for public spaces and produce collective urban memories in monuments and memorials of specific events. In contrast, the government erases and defaces past memories. I imitate the government’s denial in my work by cutting out the streets from the map as if the places and the memories of these places are erased. Memory can be publicized when it takes place in a public space and becomes a public memory. Public memories are the invisible layers of the public spaces. As Edward Said says, ”[…] collective memory is not an inert and passive thing, but a field of activity in which past events are selected, reconstructed, maintained, modified, and endowed with political meaning”. Accordingly, it is important to prevent the death of memory by denying and minimizing it . Iran has always been a site of construction and deconstruction. Each empire brought with itself new sets of construction and a period of deconstruction. Demolishing the symbols and public spaces in order to erase the public memory had been in the history of Iran. I chose plywood as a reminiscent of construction sites where the boundaries made out of plywood exist around them to prevent any danger. Also, wood is temporal and easy to demolish. The video installation is made of 4, 4’x8’ plywood and 9 channels video. The videos show empty streets of Tehran. There is the minimum presence of people in the videos, imitating the government’s reaction to the event. Government presented the event on mass media as if no one came to the streets and there were few who did protest. The videos also depict streets of a big city, empty of people, at peace after the event, “The scene of a crime” as Walter Benjamin writes about Eugene Atget’s unpeopled photographs of Paris “ The scene of a crime, too, is deserted; it is photographed for the purpose of establishing evidence.” The government erases the staging violence incidents that happened. The next day, the only evidence is the uncanny absence of people. 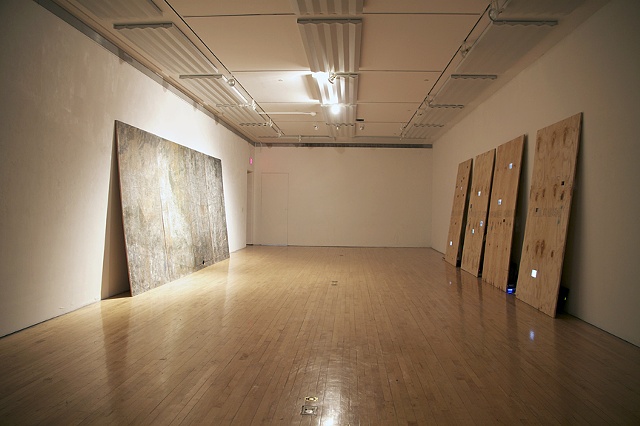 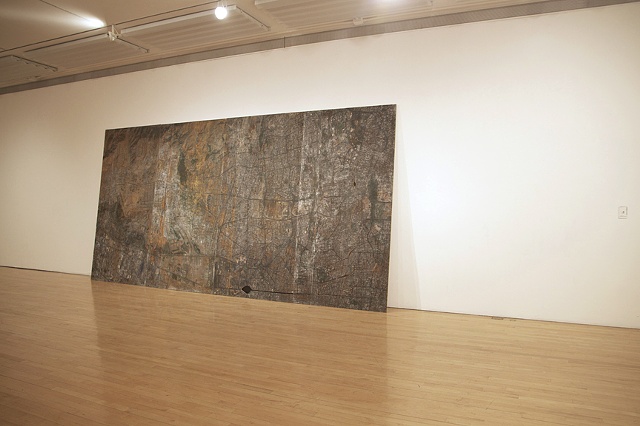 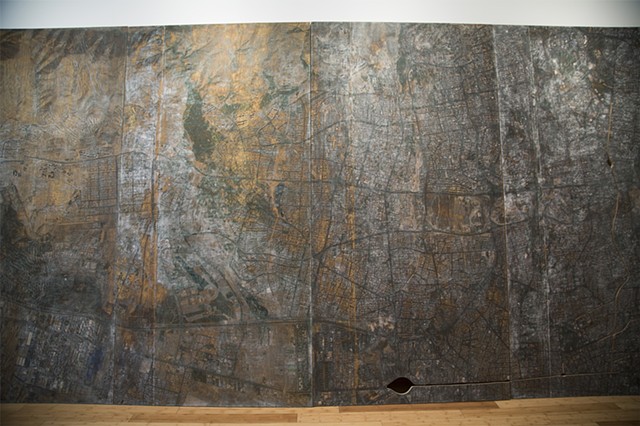 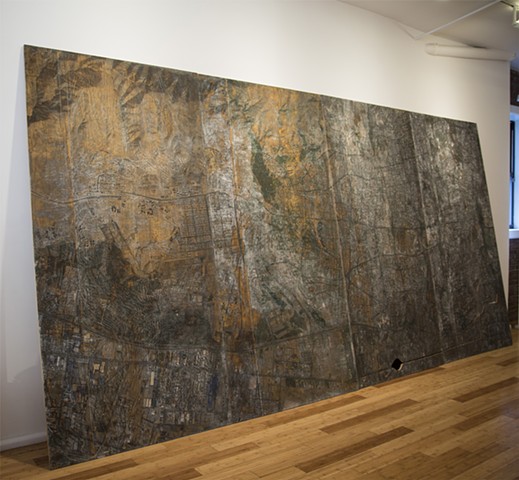 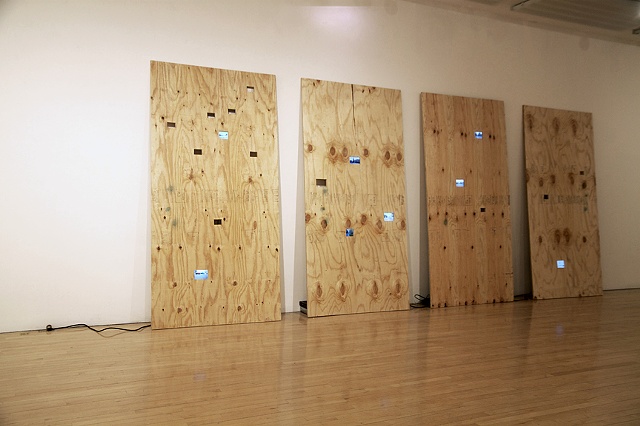 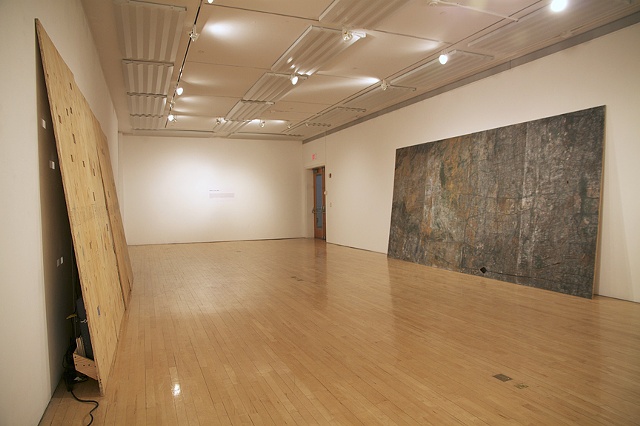 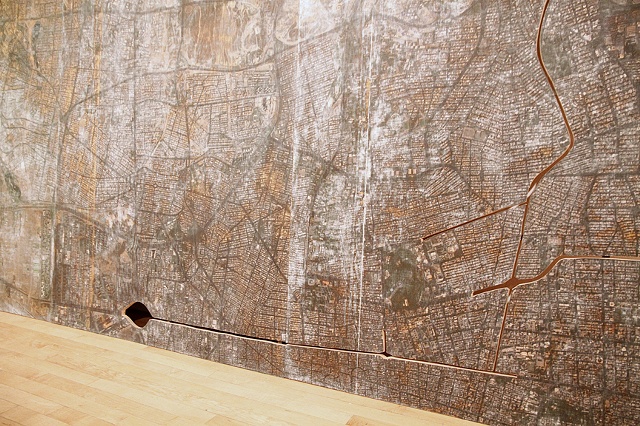 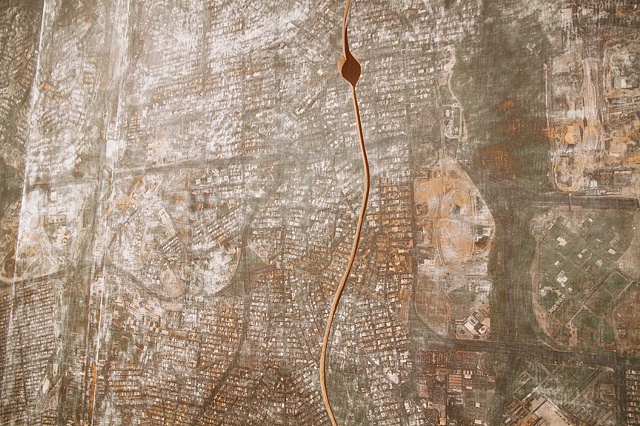 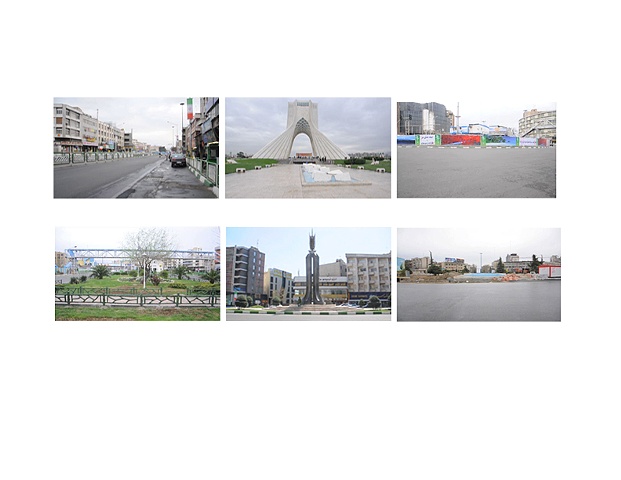